My sister requested a birthday card for a "quinceañera" the equivalent
of a sweet sixteen. Here's the easel card I whipped up for her: 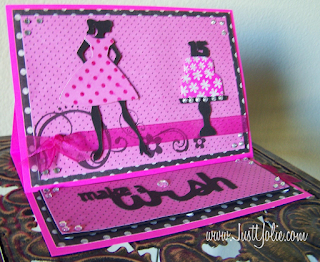 I used the Forever Young and Sweet Treats carts. The cuts were a bit small to include the scallop edge on the cake stand and the flames on the number candles, so I didn't cut the scallop and trimmed off the flames. :) I used the Cake2Build stamp set by Stamps of Life and use a glitter pen to fill in the flowers. Both pink polkadot paper are from Target's dollar spot and the black/white is by Paper Pizzaz. The organza ribbon from Joann's. I also included a tag that slides to the right under "make a wish"....and for the final touch, I added hotfix stones.

...and here's a birthday cupcake card...except for the card base, all paper is from scraps.  I stamped the definitions of "sweet" and "wish" using Stamps of Life Dictionary4Me stamp set.  The cupcake and "make a wish" is also from SOL, HappyBday2You.  I used an EK Success punch and wrapped some twine. 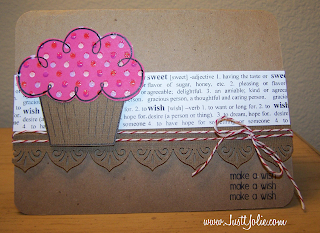 Love them! Really like the monochromatic look of the first card and the additional stamping you did.
The cupcake is so cute and love that edge punch (I don't think I have?) ... and where did you get twine? lol

This is such a sweet card I love those quinceanera years, so fun for the girls.

Wonderful cards Yolie! I love them!

Thank you for stopping by my blog!! I'm so glad you did. I'm now following you, and I can't wait to see everything that you post. Such an inspiration!

Super cute card! Forever Young is one of my many favorites!

I love them both Yolie! I really like that punch on the 2nd card. Great job!

Have a great weekend!
Tisha
http://tishascraftcove.blogspot.com

Hi, Yolie!!! Wow, I just knew I'd get back, come to visit you and see an amazing creation!!! Love this card!!!

What beautiful cards! I love the quinceañera!!!

I love your adorable cards....especially the cupcake one. I am a new follower and I used to live in San Diego. I love southern California. :)