It's Spotlight Week at Rita Barakat's Blog. This week's sponsor is Tonic Studios and we are kicking off the week with a Blog Hop. If you want to start the hop with the first stop, please visit Rita's blog first.
Now onto my card, I used Sassy Sue rubber stamp and colored her with alcohol markers. I came across an older chalkboard style paper and chipboard that was perfect for what I had in mind. 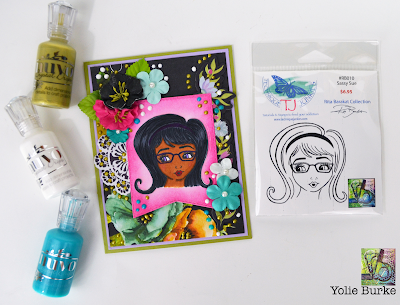 I added chipboard accents onto the top layer and glued the flowers. Next I added Sassy Sue and added Nuvo Crystal Drops in Gloss White, Bright Gold and Caribbean Ocean throughout the card. 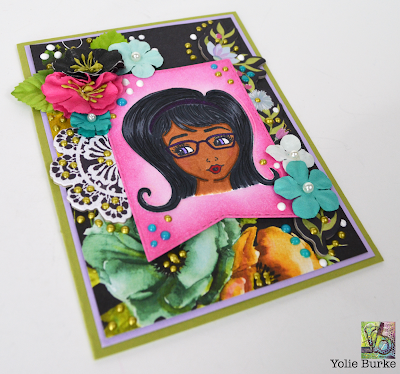 Love my Nuvo Crystal Drops, if you look closely, I also added some to the large teal and gold centers of the printed flowers. 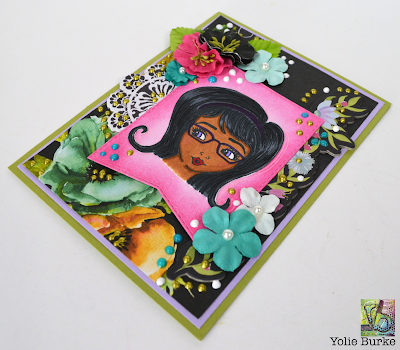 Please leave a comment at each stop for a chance to win ONE of the THREE prize packages sponsored by Tonic Studios. Please note, colors will vary. 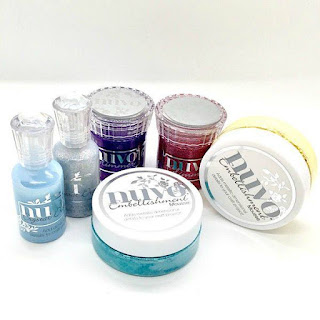 You are also invited to join Rita Barakat LIVE on her Facebook page for Mixed Media Monday. 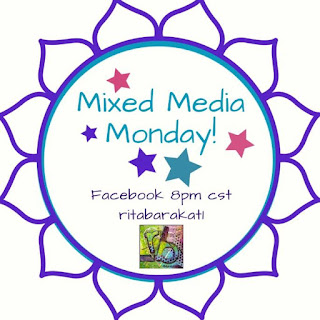 Please continue hopping, your next stop is the mega talented KAREN. 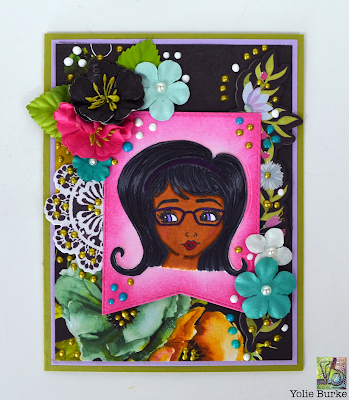 I wasn't feeling the orange dashboard for June in my work planner. So I gave it a make over.
I used Rita Barakat die cuts, Veil of the Fairies* and gathered up some scrapbook paper. We are fortunate enough to have Tonic Studios sponsor the Design Team this month. Love their products. I used Nuvo Glue Pen, Nuvo Radiant Gold Gilding Flakes and their Nuvo Crystal and Glitter Drops. 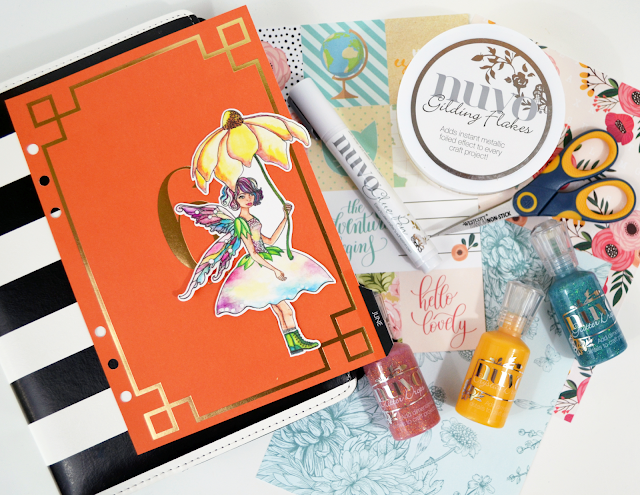 This is the first time I've worked Nuvo's Gilding Flakes. Here are a couple of tips; carefully open the jar. The flakes are very light and fly away easily. Don't breathe to heavily or sneeze for that matter. :)

I trimmed the pattern paper to the size of the dashboard. It was slightly smaller, but I don't mind the matted orange.
I applied the glue with Nuvo's Glue Pen where I wanted the Gold Gilding Flakes, allowed to dry and then used my fingers to rub off the excess. You can use a brush too. You can then store the unglued flakes back into the container. 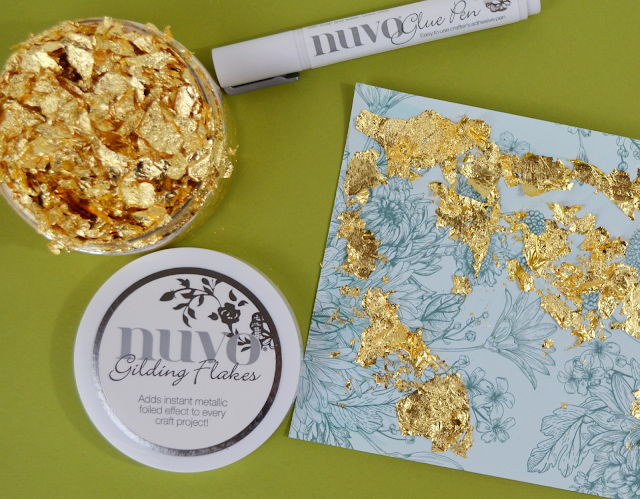 I fussy cut a few of the blooms from the pattern paper with Westcott's Non-Stick scissors and used the Glue Pen to adhere them along the border of the page. 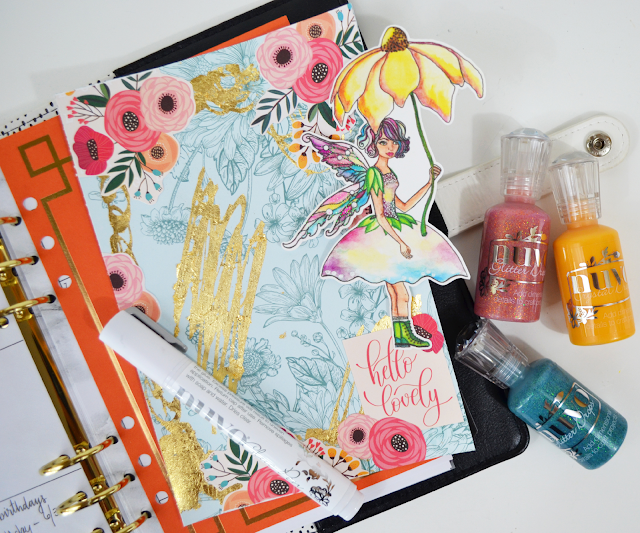 I then glued down the Fairy and added Nuvo Drops throughout the page. It adds enough dimension to the page without adding too much bulk. I also trimmed an acetate cover with gold lettering; love love love 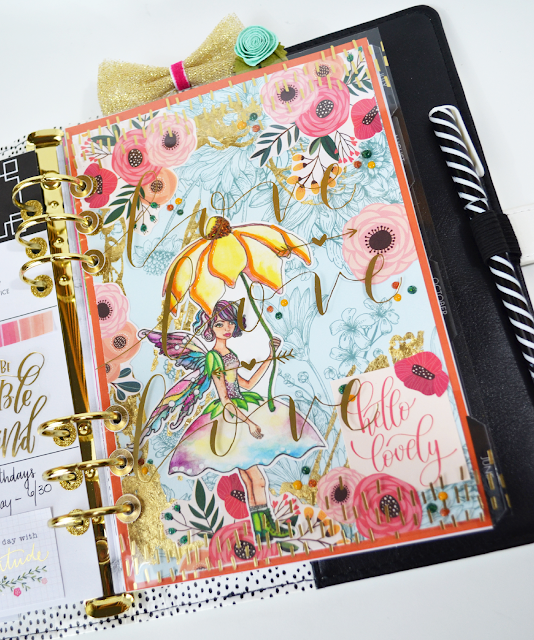 So happy with the outcome. The most difficult part of this small project is waiting for the Nuvo Drops to completely dry. :) 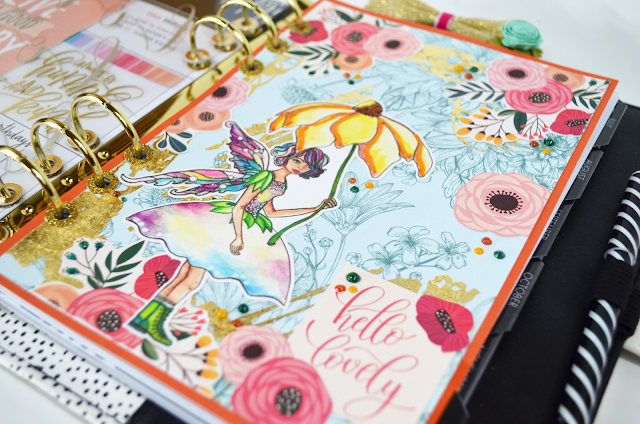 Thank you for visiting and happy crafting and planning!

*Every month there is a new collection release, however it's only available for one month. Veil of the Fairies is no longer to purchase, but a new collection, Mystical Creatures is available.

Hello and welcome! Exciting to be participating in today's blog hop to unveil the NEWEST rubber stamps designed by Rita Barakat available through Technique Junkies.

I created with Floral Mermaid, she's beautiful! I colored her with Spectrum Noir markers and used my favorite color combo. 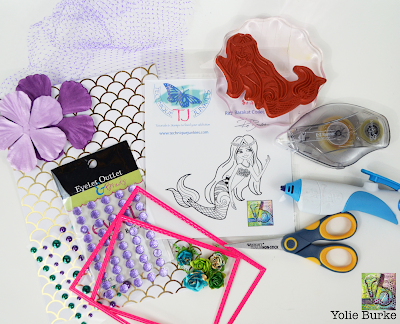 The mermaid foiled paper was originally white, but I used a purple marker to color, it makes for a better fit. I recycled the purple netting from a bag of nectarines. It's purple, I just had to use it on this card. 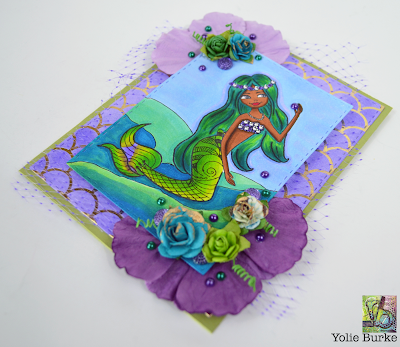 I folded the two large purple flowers to resemble seashells. I then added the image, small flowers and sprinkled it with pearls. I added a purple pearl to her hand; love how she is admiring her find! 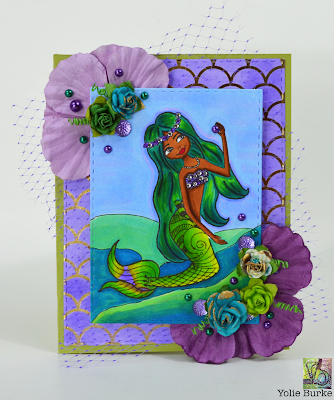 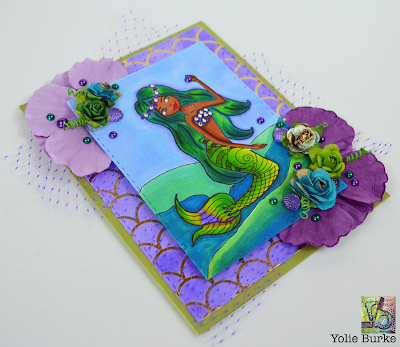 I added the tiniest rhinestones to her bikini top and floral headband for a bit of sparkle. 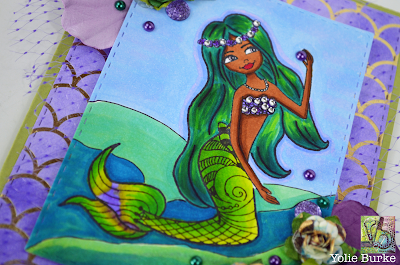 Now through July 8th save 15% on July's Release.
Don't forget to leave a comment at each stop. Your next stop is Stephanie's blog.